Creativity: The Final Frontier In Business Everyone can compete on a tangible level. The real key to business survival lies now in the intangible.

Do you appreciate the importance of creativity?

Everyone can compete on the tangible level – the real key to survival lies now in the intangible. I attended a function recently, where Todd Sampson presented to a crowd of Marketing and Advertising professionals on the topic of creativity in business. Nothing ground-breaking on the surface… that was until he began to explain something which we’d all seemed to have forgotten.
​
His talk was inspiring and insightful, and it really got me thinking about the true nature of creativity.

As a Marketing professional, creativity is the cornerstone building block in my repertoire however, he made me truly consider what that meant.

When you really consider it, creativity is a precious commodity that must be practised and respected. This is why I write, both creatively and professionally- to keep the creative juices flowing, so to speak.

Creativity is an underappreciated resource, simply because it’s often subjective and difficult to measure, yet holds the key to all future success.

Sampson claims that, with the era of technology, rapid advancement and digital disruption that we’re in right now, creativity is the final frontier of competitive advantage.

Think about this for a minute: he states that it’s only through an individual or organisation’s ingenuity that we can truly differentiate ourselves, and I began to realise how right he is. It’s in our ability to problem solve and innovate that leads to progress, success and, essentially profit. Today, everyone can compete on the tangible level; the real key to corporate survival lies now in the intangible.

It’s in our ability to problem solve and innovate that leads to progress, success and essentially profit.
​

Creative thinking can solve any problem and often doesn’t require millions of dollars: it just needs an out-of-the-box thinker to approach it in a completely different way.

Ironically, this is nothing new or revolutionary, yet it seems that the majority of organisations fail to do it. The rely on the same-same conservativism, then wonder why new competitors are entering their previously well-established industries and turning the game completely on its head. One only has to look at Uber to see this at work. The impact that it’s having on the taxi industry in Sydney (and all around the world) is profound, and it all started as an idea two men had with a smartphone app.
​
To be honest, it’s not surprising that, as adults, we don’t venture far down the creativity path.

​Growing up, our parents always told us to act more maturely. Our schooling taught us to memorise. And the corporate environment commands us to follow well-established rules. The true creativity we were born with is so drummed out of us by the time we enter the workforce that it’s no surprise that a truly creative individual or organisation is far rarer than we care to admit.

In order to be creative in business, there are four steps to be followed:

No one ever knows the real, deep down reason for the problem, which is why so much money is spent on the reoccurring symptoms, rather than the root cause. This is also why organisations often turn to external consultants, who can see beyond the politics and the blinkers, in order to suggest drastically needed solutions.

The trick is, if you can write the complete problem in one sentence, after asking yourself ‘why’ five times, you’ve probably found it. Now that creativity has a clearly defined target, it’s time to innovate.

The more eclectic the group, the better. Isolate around six of them into a room and present them with the problem to solve.

(3) Get this group to spam out ideas without any boundaries, filters or limits.

No idea is too big, too small, too unrealistic or too stupid. It’s these “crazy” ideas that sometimes end up completely reinvigorating a product line or industry.

(4) Ask yourself what other problems or obstacles your organisation has, and start at step one again.

So, besides it being a part of us that’s been conditioned to remain dormant, why do we all shy away from being creative? 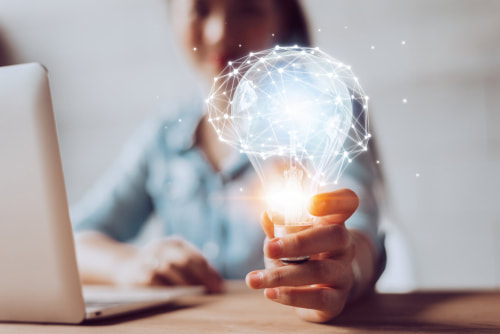 It’s time to be bold.

It essentially boils down to fear of being bold. We’re scared to put ourselves out there. If someone can dare to take the risk and do something different, this is where creativity is found and innovation is discovered. Of course, things don’t always pan out ideally, and this leads to reinforcing the natural instinct of fear. However, it’s crucial not to let fear short-circuit the innovation process, because it’s insanity to do the same thing over and over and expect a different result.

The reality is, fear can undo or prevent creativity. However, the most successful organisations balance the two elements. Every major decision involves fear, and it takes courage to be braver for a few seconds longer than all of the people around us- for it’s there, in those extra few seconds that true creativity lies.

Fear is defeated by action, one step at a time, because progress is always better than perfection. Can you urge yourself to be braver than those around you, and fight on when everyone else doubts you? Will you pick yourself up and try again if you fail the first few times? Can you afford not to be creative?

Creativity can change the world if you allow yourself to be its conduit.

How Can Melotti Media Copywriting Help You?

To engage your customer and achieve ongoing business success today, you need quality copywriting and consistent content. However, we understand that this is easier said than done.

You’re time poor and spread thin, and writing isn’t your expertise. So, focus on what really matters, while we take care of all of your copywriting and content marketing needs!

For more information or to speak to a quality copywriter to get the results your business deserves, contact me now at chris@melottimedia.com.au.